The mining machinery drum produced by our company is complex in structure and has many ribs. It needs to be assembled in a core shape. Therefore, it is difficult to ensure the size and casting difficulty. At the same time, it is required to perform ultrasonic and magnetic particle inspection on the outer part of the casting.
When it is produced according to the original process, it shrinks in the feeder subsidy part. The original process was adjusted on this issue, and the traditional process was improved to ensure that the casting quality met the design requirements.
First, the initial improvement of the original process
Due to the shrinkage defect at the bottom of the riser, it is presumed that the feeder has a secondary shrinkage due to the small riser, that is, the feeder has insufficient feeding capacity. In view of the above reasons, the process decided to adopt the following scheme, as shown in Figure 1. 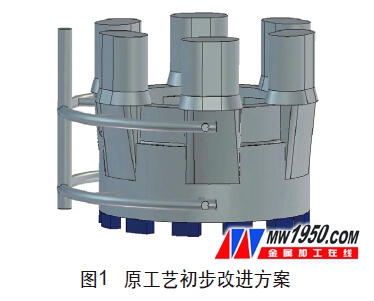 (1) Retain the original molding sand process, increase the size of the riser, ensure the filling of the castings, and re-calculate the computer numerical solidification simulation of the improved process, and believe that the casting can be guaranteed.
(2) The shape of the pattern does not move, increase the thickness of the plane ring on the casting, and modify the 1# core box to make the feeding passage of the casting smoother.
(3) Retain the original cold iron size and placement.
After the implementation of the process, three pieces were produced according to the first piece system. As a result, after the cutting of the riser subsidy, no obvious shrinkage of the original process was found, indicating that the improvement had a certain effect, but it was found in the meat increase at the subsequent processing. There is a crack phenomenon, and at the same time, some shrinkage occurs on the casting body. The rest of the requirements have met the requirements for non-destructive testing.
Second, process re-optimization
In view of the above reasons, after careful technical research, the suspicion is still due to the secondary shrinkage caused by the riser meat in the process of shrinkage and the shrinkage and cracking of the casting body. Therefore, the method of increasing the riser cannot be completely solved. The problem of shrinkage and cracking. Due to the many reasons for shrinkage and cracking, further process improvements should be made. It is now decided to trial production according to the following scheme.
Riser design
(1) The design of the bright riser has a great influence on the casting due to the increase of the meat in the original process, and the upper part of the riser is removed to increase the meat, and the tendency of the upper part to shrink is reduced. At the same time, in order to make the middle part of the casting have a supplementary passage, it is made to directly make up 6 small meats along the outer round surface, and the string length is 300 mm. At the same time, reduce the size of the riser, as long as the upper part of the casting is guaranteed.
(2) The design of the dark riser is due to the elimination of the large increase of meat. The bottom part of the casting needs to increase the riser to ensure the quality. At the same time, considering the convenience of the molding and gas cutting operation, the method of adding 6 dark risers at the bottom of the casting is adopted, due to the traditional method. The dark riser method does not guarantee a good filling of the casting, so a new insulation cover is placed over the dark riser to increase the feeding efficiency of the riser.
2. Cold iron design
(1) Since the feeding distance of the dark riser is not enough, and in order to increase the feeding effect of the dark riser, the cold iron is placed in the middle of the dark riser.
(2) Since there is a good filling passage between the bright riser and the dark riser, it will inevitably affect each other in the solidification of the casting, resulting in uneven uniformity of the filler castings, and formation of hole-like defects in the casting.
(3) Due to the complicated internal structure of the casting, especially the ribs are more, the hot joints are more, so the shrinkage cavities must be formed at the hot joints during the solidification and shrinkage of the castings. In order to solve the above problems, a strip-shaped cold iron scheme is added on the outer surface of the casting to avoid cracking of the casting due to the excessively thick and too dense cold iron. 18 pieces of 240mm long and 80mm thick cold iron are placed in the corresponding round rib plate part; 6 long 350mm long and 80mm thick cold iron are placed in the long rib plate, as shown in Figure 2.
3. Pouring system design
(1) Since there are 6 dark risers at the bottom of the casting, there is external cold iron in the middle of the riser, and the maximum hot joint is also concentrated at the joint between the dark riser and the casting. In order to ensure the steady rise of the molten steel, the lower part adopts the bottom injection type. The pouring system (see Figure 3), the inner runner is led to the junction of the dark riser and the casting, which avoids the occurrence of porosity defects in the external gas accompanying the molten steel into the cavity. 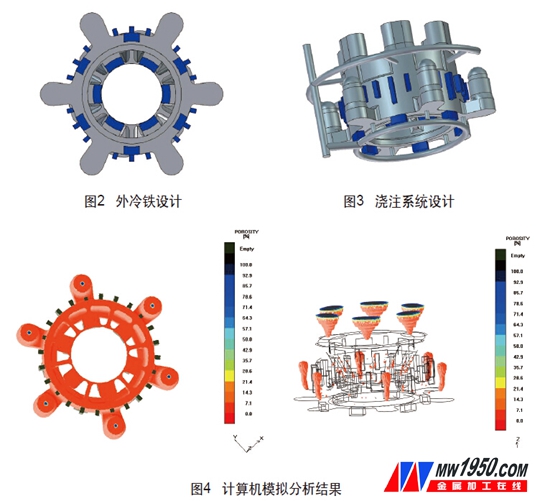 (2) Also in the lower part of the riser is the maximum hot section of the casting, the upper pouring system is led to the bottom of the riser, so that the gas in the runner can be smoothly discharged out of the cavity.
4. Shape sand improvement
(1) The sand surface is made of ester-hardened Fujian silica sand, and the corner is solidified with chromite ore. Reduce the use of chromite ore in large areas to reduce the cost of sand.
(2) The sand core surface sand is made of ester hardened chromite ore, the resin chromite sand is used for the sand in the groove part of the hard sand, and the ester hardened limestone sand is used for the rest. This can improve the repellentness of the molding sand, reduce the hindrance to the shrinkage of the casting, and thus reduce the tendency of cracking.
5. Numerical simulation of solidification analysis
Based on the above factors, the influence of factors such as riser, cold iron, gating system and molding sand are fully considered in the preparation of the casting process, and the solid modeling is carried out, and then the computer numerical solidification simulation is carried out. The results are shown in Fig. 4.
The simulation results confirmed that the improvement of the above problems is reasonable. According to this method, the production can meet the quality requirements of the casting, and the feasibility of the process is also confirmed.
6. Actual verification
According to the above process scheme, a total of 10 pieces were produced, which can meet the casting quality requirements and achieve the expected results.
Third, the conclusion
(1) In the production process of the casting, large feeders are the main cause of shrinkage and cracking.
(2) According to the new process, it can avoid the occurrence of shrinkage and crack defects. At the same time, only minor changes to the original pattern can save the loss of raw materials.
(3) Compared with the original process method, the production according to the new process method can reduce the difficulty of subsequent processing, shorten the casting production cycle, and ensure on-time delivery.
(4) The trial production of the process was successfully applied to the production of the drum series, and at the same time provided a new and stable manufacturing method for the production of such structural castings.
About the author: Guan Junlong, Wang Qingyu, Harbin Electric Machinery Co., Ltd. Thermal Processing Division.